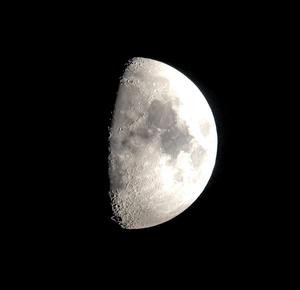 On (11/16/2018 5:45 PM) Adrian De La Torre took this picture of the moon. He held his phone to the eyepiece of the telescope. See attached photo.
The moon is just after the first quarter phase and the low angle of the sun is highlighting features along 20 degrees west longitude.  (The transition from sunlight to shadow is called the "terminator", and in this picture the terminator is at about 20 degrees west.)

Near the south (bottom) end of the terminator, Adrian's photo shows a large ragged crater with a couple smaller craters poking up inside.  This is Clavius crater.  A short distance North is a small but deep crater with a peak in its center.  This is Tycho (named after "Goldnose" who took the data that would eventually prove the heliocentric theory).

Continuing North, the smooth gray expanse is Mare Nubium, then Mare Imbrium.  "Mare" means "ocean" and long ago these were indeed oceans - of lava.   The large mare/ocean to the right of the middle of the photo (shaped a bit like Australia) is the "Sea of Tranquility" where Neil Armstrong and Buzz Aldrin were the first humans to walk on another world, in July of 1969.  (Apollo 11)

This picture has many more interesting features.  It would be a great science fair project to sort through them and find what we know about the moon and (even better) what we don't know.  Just suggesting...  We can take more pictures to support science fair projects.  Just tell us what you want and if it’s possible, we'll do it.